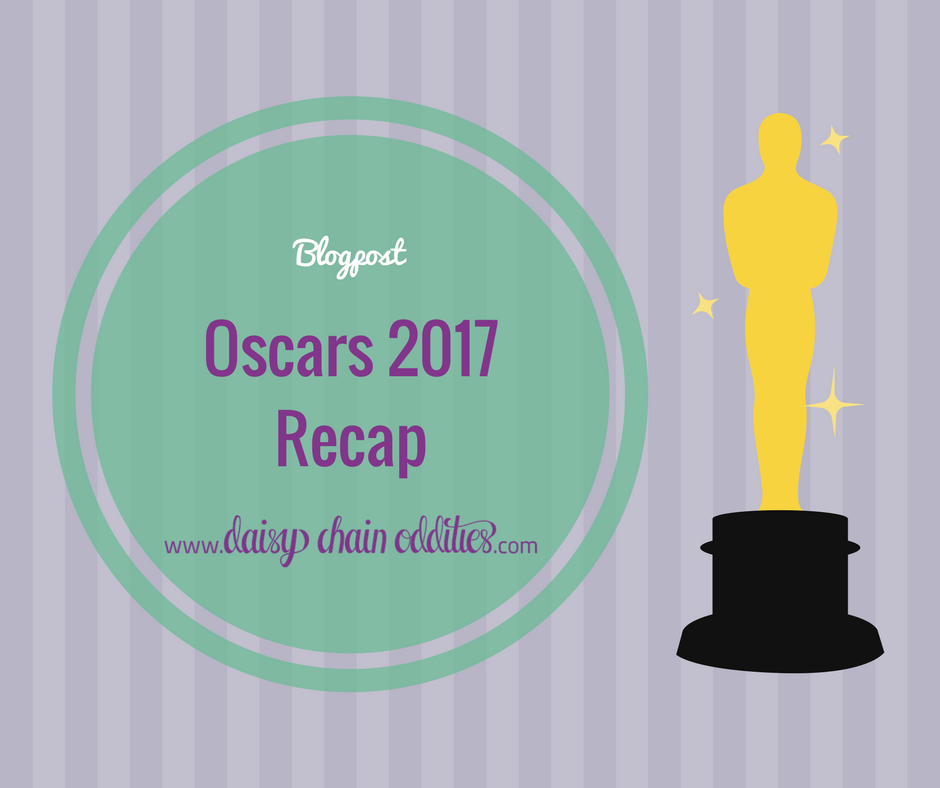 In the past I often wasn’t able to see the full show live because I had to work the next day or something like that but this year I saw the Oscars 2017 live in all it’s glory at a neighbour’s house and we had a blast! If you are one of those who couldn’t watch it or if you want to watch all the winning movies now, here are the winners of the Academy Awards 2017:

But wait, before I begin, let me tell you: Justin Timberlake did a hell of a good intro. He sang his hit Can’t stop the feeling and everyone was dancing. Such a great way to start the Oscars 2017! But now, the winners:

The first category was Supporting Actor which won Mahershala Ali for his role in Moonlight. I became a fan of him when I first saw him in the Netflix series Luke Cage. I loved to hate him there. He also played in Hidden Figures but there he was not as much in the spotlight.

Next came Make up and Hairstyling:
Suicide Squad. Well deserved in my opinion.

Costume Design:
Fantastic Beasts and where to find them. I would have been mad if they had chosen anything else because those costumes where just wonderful.

Documentary Feature:
O.J.: Made in America.

At this point the President of the Academy Awards, Cheryl Boone Isaacs, spoke a few words and the ones that stood out to me where “Art has no boarders”. That’s so true and a very nice sentiment. This was just one of many hints at President Trump, most of them came from the host of the show, Jimmy Kimmel.

Sound Editing:
Arrival. I heard a lot of good things about this movie – need to watch it soon.

Sound Mixing:
Hacksaw Ridge. When I first heard about this movie I was like “meh, another war movie, I don’t like those”. But then I found out what it is all about and that this is a true story and that Mel Gibson directed it and now it is on my to-watch-list.

Supporting Actress:
Viola Davis for her role in Fences. I was pretty sure that she would win this category even tho I also rooted for Octavia Spencer for her role in Hidden Figures.

Foreign Language Film:
The Salesman. The director of this iranian movie decided to not attend the ceremony in protest of Trumps travel ban.

Animated Feature:
Zootopia. This looks so cute too I need to watch it really soon.

Production Design:
La La Land. The first win for them this evening even tho they were nominated 14 times.

Visual Effects:
Jungle Book. This was the first category where I was sad that my guess didn’t win. I really wanted Doctor Strange to win this one.

Film Editing:
Hacksaw Ridge.This is one of those categories I only recognise during a movie if it is done really badly.

Documentary Short:
The White Helmets. This was the only category where I saw all but one of the nominees and I knew this one would win. It takes balls to shoot a documentary in the middle of a war zone – and I am not even speaking about the white helmets themselves, risking their lives for strangers every day. This movie is available to watch on Netflix if you are interested.

Original Screenplay:
Manchester by the Sea.

Actor:
Casey Affleck for his role in Manchester by the Sea

Actress:
Emma Stone for La La Land. I had a really hard time guessing the winner in this category because all of them where really good.

At last, we arrived at the most anticipated category of the evening, or morning in my case as it was about 6 am at this point. Warren Beaty and Faye Dunaway entered the stage and announced the nominees for Best Picture. Then Warren Beaty opened the envelope and …. paused. He handed the envelope to Faye Dunaway who announced La La Land as the winner. Everyone who turned off the TV at this point was probably really confused later on because while everyone from La La Land was on stage thanking people you suddenly saw hectic people with headsets running around in the background and a few seconds later one of the producers of La La Land announced that in fact Moonlight was the winner! Warren Beaty was give the wrong envelope!

If you don’t believe me or want to see it again, here is video proof:

This happened only once before in 1964 when Sammy Davis Jr. was handed the envelope for best original score instead of adapted score but back then it was obvious that the card was wrong because there were totally different people nominated. The Oscars 2017 shocked everyone with a plot twist at the end that will long be remembered. Also, cudos to the La La Land crew, they handled the situation with grace and in the best way possible.

Did your guesses all win? Where you suprised by any winners? Which of the winners is your favourite?