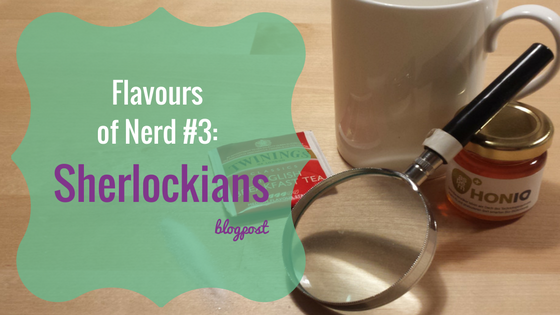 Last week I wrote about the TV-Show Elementary. It is a modern retelling of the classic Sherlock Holmes stories. But Elementary is by far not the only one who works with these stories. There are several other tv-shows, movies, books and even video games. All of this caused another flavour of Nerd: the Sherlockians.

The beginning of Sherlockians

I don’t dare to say that the classic Sherlock Holmes stories are bad (that would be a lie) but I doubt that those alone would have been enough to cause the Sherlockian phenomenon. A big reason for the hype is likely caused by one person: Benedict Cumberbatch. He is handsome and has a british accent and this makes him swoon-worthy for a lot of girls.

Of course, if the tv-show Sherlock was done really poorly, Cumberbatch wouldn’t have changed that, but the combination of him and a very well made tv-show seems to be the recipe for success. That even makes the fans wait (more or less) patiently for a year or two, to finally see another season with only 3 episodes. Sherlock is famous for letting viewers wait for a really long time, so much so that it resulted in a lot of running gags.

The show started in 2010 and is created by Steven Moffat who also wrote some episodes of Doctor Who. So far two more seasons aired in 2012 and 2014 with special episodes in between. Season 4 has started filming and will air in 2017. Sherlock Holmes is played by Benedict Cumberbatch and Dr. John Watson is portrayed by Martin Freeman who is also known from The Hobbit. It is, just like Elementary, a contemporary retelling of the classic stories.

Examples for other Sherlock Holmes productions:

This is by no means a complete list, there are many more.

Finally, if you can’t get enough of Benedict Cumberbatch and don’t want to wait until next year for the new Season of Sherlock, then you can see him  in the Marvel comic adaption Doctor Strange in cinemas starting October 27th. This makes him the second Sherlock Holmes that arrives in the Marvel Cinematic Universe after Robert Downey Jr. who portrays Iron Man.